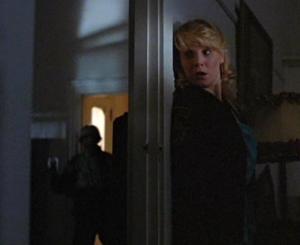 “And if you do not do well, sin is lurking at the door; its desire is for you, but you must master it.”  -Genesis 4:7b

We just bought a security system.

Signed the contract, had them install the box, the whole deal.   I’ve never been much of a security guy, but we’re living closer to the city now, and it just seemed the smart thing to do.

We kept it simple–just a tiny sensor at each of the four doors leading into our place.   When the system’s armed and a door is opened, the monitoring company is notified and the police are called.

The problem is, that alarm box doesn’t know who’s at the door.  So when I come home with my arms full of groceries, that alarm’s gonna beep at me the same as if some burglar had broken in.

You and I have a similar problem.   We can’t always tell who-or what to let through the doors of our hearts.   Even scripture points out the confusion.    In Revelation, the last book of the Bible, Jesus tells us to listen, because he’s the one knocking on our door.   In Genesis, the first book of the Bible, God warns Cain that Sin is lurking just outside the door.

That’s interesting.   Christ wants in.  Cool.   But Sin wants in, too.   Not Cool.  We need a personal security system that helps us filter the bad from the good.

And we have it.   It’s called discernment. 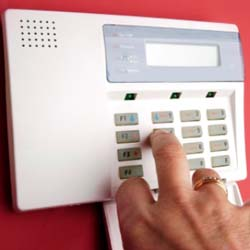 When I walk into the door of my house, that alarm beeps for 30 seconds.  I have that amount of time to press the disarm button on my key fob, or to enter the code at the alarm box.   Either of those actions allow the alarm to discern that there’s no threat, and it will disarm.

Similarly, God has given us intelligence, intuition, and wisdom which help us discern what is Christ-worthy and what is sinful.   If we are alert, perceptive, and intentional, you and I can be open to all kinds of things–but able to shut the door on that which is not healthy or holy.

Our ability to discern good from evil is God-given and invaluable.  Without it, we might have to keep our doors closed all the time, for fear of being hurt.

It may take you 30 seconds, or 2 minutes, or several days to discern what to let in to your heart, but be thankful…