A near collision with a rogue meteor…
Blizzards bring whole cities to a standstill…
The Pope resigns and conspiracy theorists have a field day…
The U.S. faces another doomsday economic deadline…

No, this isn’t a list of Best Picture nominees, it’s just another month here on planet earth.

We seem to have a lot of these events.  You notice?

Things like these happen and we put the suffix “-gate”, or “-mageddon”, or “pocalypse” to them: Snowpocalypse.  Benghazigate. Tax-mageddon.

Are we really living in such dramatic times?  Or is it the media, shoving every current event down our throats?

Or is it because of our own insatiable desire for intensity that we push things so far into the red?

I mean, a person can only hear about “Armageddon” so often before it sounds more like “Blah-maggedon”.  Yes, yes, we know, end of the world.  Yawn.

What’s to be done?

I’d just cut “Armageddon” out of my vocabulary, but I can’t do that.

Because I’ve been there.

This is Tel Megiddo, in Israel.  aka “Har Megiddo”, aka “Armageddon”.  It is the site the Bible refers to when it talks about the famous end-times battle between good and evil.

There’s a reason Armageddon was chosen for this climactic battle.  As archaeologists have dug down through layers of history at this now historic location, they found evidence of many different civilizations who ruled this mountain over the years.

That’s right, dating back from thousands of years before Christ, this strategic hill in Israel has been conquered and populated 26 different times.

The top layer of the hill is believed to be the stables for King Ahaz’s horses. But even as recently as World War I there was fighting to defend this choice piece of real estate.

In other words, this site that has seen centuries–millenia–of high drama.

You could say this strategic hill made a name for itself.

Despite a strong rainstorm when I was there, the place seemed pretty peaceful these days.  But it serves as a reminder to me that life on this planet has always had its news-worthy events.

Fair enough.  I’ll keep my eye on the headlines, and remember that somewhere in the world there’s always a drama happening.  There is always a battle between good and evil.  It always feels like the end of the world, for somebody.

But I’ve decided to put the bulk of my focus on other stuff.  On discipleship stuff.

We must serve as day-to-day disciples of Christ in the lives we lead and the lives we touch, with the same intensity and drive as the latest headline or Hollywood blockbuster.

and a little more “human interest”. 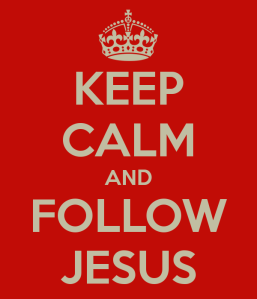