We are given no signs from God;
no prophets are left,
and none of us knows how long this will be.  –Psalm 74:9

How long has it been since your last experience of Petrichor?

Petrichor is, essentially, the smell of rain.  It’s a combination of bacteria being released from dry ground, and the smell of ozone, and the oil from certain dry plants.(Wikipedia)

It’s a wonderful, fresh scent.  The scent of new beginnings.  Starting over.  Purity.

The scent of God-presence.

I love that scent, and I’m happy to say that we’ve had so much water this spring, here in South Central Kansas, that I’ve smelled Petrichor on a number of occasions.

But I’ve had my dry spells.  Long, spiritually barren spans when hope wasn’t to be found, and emptiness was punctuated by parched coughing spells. I’ve had moistureless nights when it seemed everyone around me was lost, too.   No signs.  No prophets.  No scents.

I’ve tried seeding clouds with my tears, to no avail.  I’ve tried dancing and chanting and praying, and still the dry spell continued.  And then…

Petrichor.  Named after combining the Greek words for “rock”, and the “fluid” that runs through the veins of the Gods. (Wikipedia)  It reminds me of God in the dessert, saying…

6 I will stand there before you by the rock at Horeb. Strike the rock, and water will come out of it for the people to drink.”  –Exodus 17:6a

None of the Israelites mention any fragrance that accompanied that miracle.  Perhaps they were too thirsty to pay attention. I wonder, did the water God sent smell like Petrichor?  I like to think so.  I think God sends Petrichor in remarkable and commonplace settings, in great floods and bare sprinkles.

And sometimes, yes, God even sends the agonizing dry spell. Why? Is it to test us and torture us with dust and heat?  Or is this all part of the natural rhythms of God’s created systems?  Water follows dust, wet follows dry.  I tend to think of Petrichor as no more possible to predict than any of God’s other rhythms.

We’re moving into the dry months, I know.  I will try to find God in the wilderness, in the dust.  But somedays, as an act of hope, I plan to raise my head towards the sky, and sniff, and declare the thrill of my createdness: BAREFOOT!  A collection of my favorite devotions from over the years, complete with study questions.  Perfect for individual reflection or group discussion.  Get yours on Amazon!

You’ll never believe what happened when Valentines Day and Ash Wednesday fell on the same day, back in 2018.

I had left the house in a rush, grabbing my stuff and wishing my wife an “I love you!” as I ran for the door.  I had to make it to church in time for the come-and-go imposition of ashes. We decided not to have a service this year, opting instead for a couple hour-long spans when people could come to the church, receive ashes and a devotion booklet, and be invited to pray in silence.

There were already a couple people sitting in pews waiting when I got to the sanctuary.  I dropped my stuff in the front pew and reached in my satchel for my vial of ashes—and it wasn’t there!  Instead I found a bag of Valentines candy.  Little candy hearts I was going to pass out to my staff and family that evening.

I stood there, paralyzed, as another person came into the sanctuary.  The man walked down the aisle right to me, brushing away his hair so I could impose the ashes that I didn’t have.

Panicking, and not knowing what else to do, I ripped open the bag of hearts, grabbed one, and placed it in the man’s palm.  Looking down, we read together what it said:  “Be Mine”.

He looked at me, startled.  Straight-faced, I muttered, “Repent and believe the Gospel.” He slowly turned away, as if trying to decide if he was supposed to eat it or not.

There was a line now.  The woman behind him stepped forward, and tentatively held out her hand.  I pulled another one out.  It said, “Hot Stuff”.  Obviously that wouldn’t do, so I popped it in my mouth, said a silent prayer, and pulled out another.  “True Love.”  That was more like it.

“Repent and believe the Gospel,” I said, placing it in her hand.  She smiled.  That was a good sign. The line was all the way down the aisle, now.  Would I have enough appropriate hearts to pass out?  I said another silent prayer.

The next one surprised me: “Have Faith”.  The one after that said, “I Forgive.”  Amazed, I pulled another and gasped.  It said, “Died 4 U”.  People were leaving with tears in their eyes now.  I had to wipe a few away myself.  In later days people would tell me it was the most moving Ash Wednesday they could remember.  Believe me, I gave God all the credit.

As the last person left the sanctuary, I looked down in the bag.  One heart left.  Bracing, I pulled it out.  It said “Dust 2 Dust”.

Indeed.  Wiping the candy dust from my hands, I sank down into the pew and began my own Lenten journey.  I tried to quiet my mind, but the thought wouldn’t leave me…

If God could make Valentines Day into a meaningful observance of Ash Wednesday,

What might God do with April Fool’s Day and Easter? 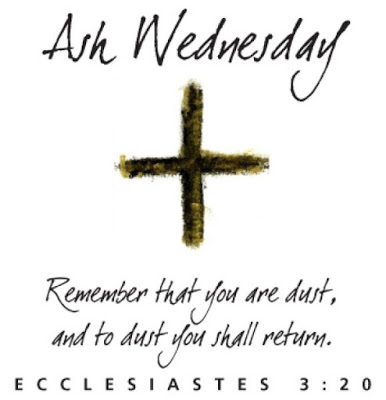 Then the Lord God formed man from the dust of the ground, and breathed into his nostrils the breath of life; and the man became a living being. –Genesis 2:7

Yeah, I’m talking to you.  According to Genesis, you and I are living, breathing balls of dust.  How does that make you feel?

Maybe you would have preferred God add a little sugar and spice?   Some moonbeams and stars?  Nope.   God just reached down, piled together some dust, and here we are.   That’s what we’re made of.

Funny thing, though.  Have you noticed how hard we work to stay clean?  We wash our hands so we don’t spread germs.  We wash our hair so it won’t get greasy.   We wash our clothes so they don’t smell.  We sweep and mop and Swiffer so there’s not a speck of dust on our floors.

Some of us even own dust busters.

Heck, there’s a robotic vacuum cleaner called the “Dust Ball”!   Isn’t that a little bit ironic?  Supposedly we’re made from dust, and yet we seem to be down right terrified of it.   It makes me wonder — do we live our lives running from our very nature?   Is it possible  God created us to be a little grungy to begin with?

I’m reminded of Pigpen from the Peanut’s comic strips.   Remember him? Now there’s a guy who is comfortable in his own dust.   Even on the rare occasions when he’d clean himself up, it’s like the dust would find him.   It was his natural state.

And it’s ours, too, after all.   Even if you don’t read the creation story literally, our modern-day fascination with cleanliness is only a few hundred years old.   Certainly, we’ve learned about germs and sanitation, and that’s propelled our need to bleach out any stains, but maybe it’s more than that.

Maybe we’ve convinced ourselves that the very earth we come from is somehow separate from ourselves.   With every lather, rinse, and repeat we may be trying to distance ourselves from the very dust we’ve sprung up from.  And if indeed that’s what we’re doing, might that create distance between ourselves and the God who created us?

Gardeners know it.  Farmers know it.  There’s something Holy about being connected with the Earth.  A little dust might do you and I some good.

So let’s go barefoot — just like Adam and Eve!  Skip an occasional shower, even.  Let’s plant some flowers.  Get some soil under our fingernails and be happy about it.

After all, Dustball, being connected to the Earth God created…

Is nothing to sneeze at.