To the woman he said, “I will make your pains in childbearing very severe; with painful labor you will give birth to children. — Genesis 3:16

In 5th grade, all the guys were led into a classroom down the hall, where we were taught some sterilized version of the facts of life.  The girls had their own lecture.  If I remember correctly, their conversation lasted longer than ours did.

I remember rejoining some of my female friends, and seeing a strange look in their eyes. They all seemed to have aged a year or so in maturity.  I wondered if they had been told different facts than we had.

Indeed, they had.  More than just the rough outline of Male/Female sexuality, they were learning about pain.  The monthly ordeal of menstruation, the excruciating process of childbirth.  I don’t know if any time was given to the discussion of other forms of pain for women — objectification, harassment, abuse.  Somehow I doubt it.

I had no clue.  I knew of none of this, and wouldn’t for years.  Some of it, I’m still learning.

Last week, for instance, I sat with my senior high Sunday School youth at the coffee shop and asked what was meant to be a throwaway question, “The angels said ‘be not afraid’.  What’s your biggest fear?”

One of the young women said, without irony, “I’m afraid of men.”  The other two quickly agreed.  They began to share with me and the other young men there, how difficult it is for them to be out, anywhere, by themselves.  I don’t know what it was about this unexpectedly frank conversation, but as they each gave real world examples of how scary and painful it can be living as a young woman in this world, it occurred to me…

That little wood-carved figure of Mary, there on my coffee table nativity set, is going through some stuff I simply can’t imagine.

Not only do I have next to no concept of what it means to be a young woman in our world today, I am utterly clueless of what that young girl in her teens must be enduring on Christmas Eve.

Having a baby is a big deal.  Having a baby in a cattle stall, with only (I’m guessing) a pretty clueless husband to assist must have been terrifying.  I can only imagine such physical pain coinciding with great joy!

I’m aware there are many women in the world whose pregnancies aren’t successful, due to complications, or lack of assistance, or poor sanitation. Wow. More pain that I can hardly fathom.

I’m reminded of Adam and Eve, expelled from the Garden of Eden.  There were consequences to their disobedience, and one of them was that childbirth would bring pain. I’ll be honest, I haven’t thought much about it before.  The literal pain alongside the joy of Christmas.

I tend to think that God is not inflicting these punishments, but that they are natural consequences for us choosing to live in the harshness of the world.

Regardless, I feel that Eve got the worse end of the deal, compared to Adam.  As did Mary, with Joseph.  As I’ve come to believe more and more, women in general face pain that men aren’t always aware of.

This is not a pity party for the ladies. It’s closer to a celebration of the strong and faithful women I have known in my life, who may have had to struggle more than I know just to celebrate Christmas this year.

In the least, I’m aware that the mother of my Savior deserves some gratefulness on my part.  I’m guessing the same is true for all the other women in my life.

It’s not much, but I wanted to say, on behalf of my 5th grade clueless self, and my 50-year-old slightly less clueless self…

I was thinking of you this Christmas.

Have a Merry Christmas! 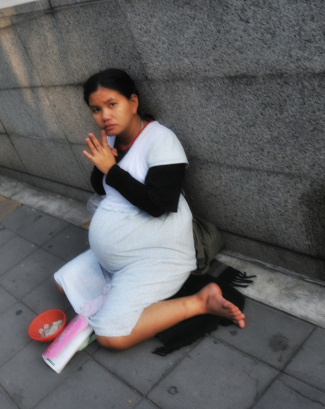