After Jesus was born in Bethlehem in Judea, during the time of King Herod, Magi from the east came to Jerusalem 2 and asked, “Where is the one who has been born king of the Jews? We saw his star when it rose and have come to worship him.” –Matthew 2:1-2

I’ve been listening to a trilogy of sci-fi audiobooks, not at all religious.  Something like 50 hours of material, and most of it has been really good.  But the other day, with about 90 minutes left in the trilogy, suddenly a spaceship shows up riding behind a comet, and the occupants of this spaceship?  The Magi.

Yeah! The Magi, the wise men from the East.  Apparently they are aliens who show up every so often for special events, like the birth of Jesus.  Honestly, it was a strange thing to throw in to this series, but I’m intrigued to see how the last hour and a half goes.

The other reason I’m intrigued is because of some pretty explosive news out of the Pentagon.  Did you hear? For the first time in decades, they let us know that they’ve been secretly investigating UFOs.  What’s more, they released footage of a fighter pilot intercepting a UFO in 2004.  They have no explanation for what it was, and supposedly along the way they’ve recovered materials from these crafts that have “amazing properties”.  You can read about it here.  UFOs?

I’m gonna be honest with you.  I think this is a big deal.  I’ve always kind of had one eye to the skies, wondering if we’re alone or not, but this is The Pentagon releasing this information.  This isn’t some quack making up stuff on the internet. Time will only tell what else gets revealed.

So, back to The Magi.  Could these astrologers have literally been from out of this world?  Could the star that guided them have been some ship, pointing the way?  Well…I can find you a couple dozen websites that say exactly that, but everyone of them sounds written by a crackpot.  Search for yourself if you want to go down that rabbit hole.

You know?  Baby Jesus, who we’re in process of adoring — does he have “street cred” on a street in, say Alpha Centauri? I mean, there’s a whole lot of space out in…Space.  When we say Jesus is Lord of All, do we really mean ALL?  Or is he limited to Peace on Earth and Goodwill to Humans?

During the span of time when the texts of the Bible were written down, there was very little known about “Out There”.  Today, we know a lot more, but still with so much left to learn.  The notion of “Little Green Men” is still comical to us, although we continue to find planet after planet capable of supporting life.  It may only be a matter of time until intelligent life in other places becomes known to us.

When that happens, we may discover they know God through Jesus, or in an entirely different way.  Or not at all. Regardless, I’ll be ready to share the Joy of Christmas with anyone who has ears to hear about it.  (Or if they don’t have ears, I’ll use sign language or something.)

You don’t have to be a Magi, or an alien, or a shepherd or an angel or a spacecraft, or a star, to be able to point the way to the manger, my Good Christian Friend.  It’s as simple as this:

When someone says “Take Me To Your Leader”… 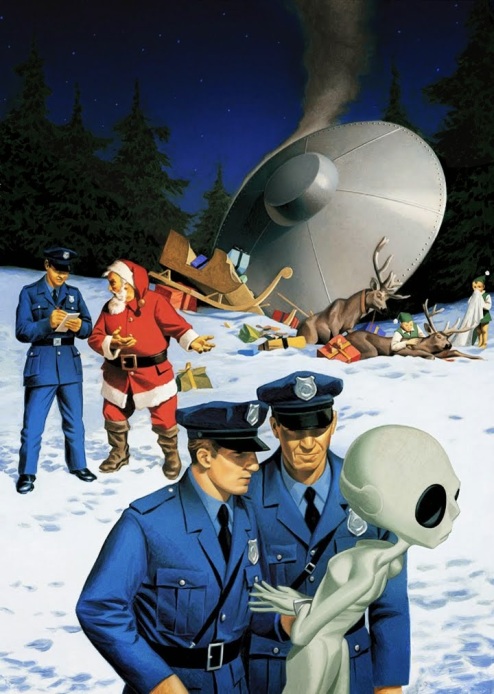