Someone asked me to write a devotion about dinosaurs and creation.

And I thought, “they must have it in for me!” No matter what I’d say, I’d be destined to get somebody upset.

So I decided not to do it.

So let me think:

I was 8 years old when I saw my first dinosaur skeleton, at the Museum of Natural History in Chicago. It was awe inspiring to me, this ancient creature that walked the earth millions and millions of years ago. I believed God created them. Still do.

I also remember, about that age, learning the creation story in the Bible. A whole universe created in 6 days, with a day left over to rest. Again, awe inspiring.

When I was 23, I saw the movie Jurassic Park and told my wife, “It’s just like being there!” 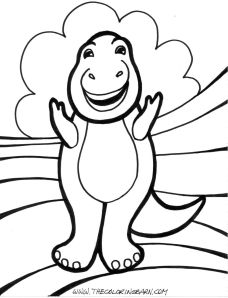 When I was 24, I went to seminary and delved deeper into the story of creation. I told my wife, “It’s just like being there!”

Some folks have trouble reconciling the ancient presence of dinosaurs and the creation stories in the Bible. Not me.

For many people, the whole issue of our origin is a big area of contention. To be honest, I’ve never had trouble reconciling our scriptures and science. The concepts of evolution and creation seem, to me, to go hand in hand.

I suppose the problem comes when people take either the creation stories of the Bible or the Origin of Species as fully complete “origin” stories. I don’t believe either were intended to be so.

Darwin’s Theory of Evolution is just that, a theory. There’s lots of evidence and conjecture to back up the idea of natural selection, but there is no scientific theory in existence that can fully explain where we come from, and why. There’s more to the story.

Similarly, the Creation story in the Bible tells us who created the world, and quite a bit about why. The “how” part, it seems to me, is an outline designed to engage our creative imaginations so that we can comprehend God’s amazing work. Again, there’s more to the story.

If you’re still reading, (thank you) then chances are you may exist where I do, in the area where our religious teaching and our scientific learning overlaps. Why should we have to choose? I can believe in a Big Bang and Intelligent Design. I can believe in dinosaurs and Neanderthals and a God who made us in God’s image.

John Wesley, the founder of Methodism, drew upon Reason (science) as one of the four main sources of his faith.  I can do no less. So as I think about our origins, I hold Scripture in one hand, and Reason (science)in the other.

Actually, I hold Tradition in my third hand, and Experience in my fourth.

P.S. What do you think? Take part in this poll! And feel free to add your (constructive) comments below!