“You are so PETTY”, the anonymous note read.

She crumpled it up in a ball and threw it inside her desk, looking around to see if anyone was watching. She made an effort to return to her seat with a forced smile on her face.  She’d have time to cry after school.

And she did cry.  Even though she was popular, and had lots of friends, the words stung her. Was she really petty?  She thought she knew what the word meant, but she decided to look it up just in case:

“mean or ungenerous in small or trifling things: a petty person.”

She wondered who had written the note, and what she had done to deserve the harsh words.

Had she been mean?  Well, maybe sometimes. There were kids in her class that she teased.  Some of them didn’t dress very nicely.  She didn’t mean anything by it, really.  She was just laughing along with her friends.

Had she been “ungenerous”?  Well, she did talk behind some kid’s backs. That probably wasn’t very generous.  And she hadn’t invited Gabriella over for a big sleep over, even though they’d been best friends last year.  Gabriella’s parents lived in the “wrong” part of town, according to some of her other friends.

Now she was crying again.  Not just for embarrassment, but for shame.  She hadn’t really stopped and thought about how she might be hurting other people.

She looked at the cross hanging on her bedroom wall, and cried some more. She reached for her Bible, and it flopped open to where she had bookmarked one of her favorite verses:

“Love is patient, love is kind. It does not envy, it does not boast, it is not proud. It is not rude, it is not self-seeking, it is not easily angered, it keeps no record of wrongs. Love does not delight in evil but rejoices with the truth. It always protects, always trusts, always hopes, always perseveres.
Love never fails.” 1 Corinthians 13:4-8

Finally, she said a prayer and asked for forgiveness for how she’d behaved.  She even prayed for the person who had written her the note.

The next day she felt very different as she walked into class.  She found herself looking at each person through new eyes.  She wanted to see people the way Jesus saw them.

She sat down at her desk, and after thinking about it, reached inside to grab the crumpled up note. She thought she might keep it as a reminder.

She flattened the note out and her jaw dropped.

There it said in plain English, “You’re so PRETTY“.

Blushing slightly, she smiled and put the note back in her desk.

For a moment the thought passed through her mind, “This changes everything”.

“No it doesn’t,” she said aloud, softly, smiling. 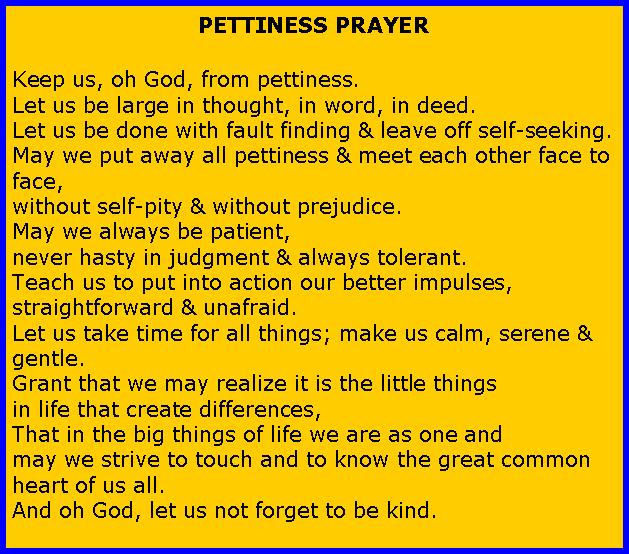