“Mr. Mcgee, don’t make me angry. You wouldn’t like me when I’m angry.” – David Banner AKA The Incredible Hulk

I knew a guy, back in the day.

He was a nice enough guy, popular for a 4th grader, good looking, well behaved. We were almost friends.

But when we would play football on the playground, he became a different person. He would begin to scream in rage.  He would stand up tall and flex his muscles, seeming to double in size. Veins would throb in his head. His shirt would rip at the seams. He would tackle unsuspecting opponents with a vicious satisfaction. You could see the adrenaline transforming him into a monster.

After every game it would take him a good fifteen minutes to calm down and return to his mild-mannered self. It got to the point where the other guys didn’t want to play with him anymore.

I talked to him about it once. I said, “you get so angry when you’re playing games. It’s like you’re out of control”.

He nodded reluctantly. “I know. I think there’s something wrong with me.”

No, he didn’t turn green, but in just about every other measurable way, he was our playground’s Incredible Hulk.

I know, I know, the Incredible Hulk is a superhero. A good guy. But not for this devotion. See, there are lots of Hulks out there, and more often than not, Hulks Smash through life in an unhealthy way.

Do you know any Hulks? Contrary to what comic books and TV has taught us, Hulks come in all shapes and sizes (and colors). The one thing all Hulks have in common is that, no matter how they appear on the outside, there’s a ticking time-bomb of anger inside, just waiting to go off.

You may be one, yourself.

Anger is one of the hardest emotions for us to control. I liken it to rocket fuel. Powerful, explosive, dangerous when it’s unfocused. While it is possible to channel your anger into something productive, there are millions of people in our society who never learned how to do that.

If Jonah had his way, he would have turned into the Jolly Green Giant and stomped the city to the ground. His uncontrolled anger kept him from listening to reason, and listening to God.

Some of you know all too well the danger that comes from living in close proximity to a Hulk. Some days may be good days, and other days may be nightmares. Domestic violence, dating violence, and bullying are all examples of out-of-control Hulk behavior. If you feel trapped in a situation involving a Hulk, please know that God wants more than that for you  (and them). Make sure you are safe, and talk to a pastor or a counselor.

Others of us come across Hulks in traffic, in lines at the DMV, and quite often at the ball game (especially if there’s beer involved). My advice? Walk away. Hulks tend to deflate if there’s no one around to get their blood pumping.

And if YOU are the Hulk, ready to explode with rage, even when you do your best to avoid it, know this: There is nothing about your great anger that makes you incredible. In reality, it’s a detriment to the grace-filled life God has called you to live.

It’s probably time to get some help,

And a new shirt.

Have a Banner Week, 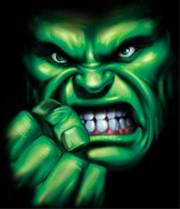