He is, of course, John the Baptist.

This, THIS is the best Jesus could do for an advance man?  A big scary looking dude wearing a shirt made of camel’s hair? A guy who lives out in the wilderness, and munches on locusts???

In a word, he’s scary.  Right?  Bordering on dangerous.   Would you let your kids head outside of town to play with Sasquatch?  Or Grizzly Adams?  Or Hagrid?  (Okay, that last one might be kind of cool).

It’s hard to comprehend a WORSE person to pave the way for Jesus’ coming.  I mean, wouldn’t you want someone more approachable for such a job?  Somebody with decent grooming skills?  Somebody with a good sales pitch worth listening to?

Oh wait.  John may not have worn a slick suit and $200 loafers, but he had an incredible sales pitch:

“After me comes the one more powerful than I, the straps of whose sandals I am not worthy to stoop down and untie. 8 I baptize you with water, but he will baptize you with the Holy Spirit.”  Mark 1:7-8

Here’s this powerful wilderness man speaking about somebody even more outside-the-norm who is coming.  Somebody more powerful, more connected.  In other words, John says, “If you think I’m wild, just wait.”

Perhaps it was John’s unlikely appearance that actually appealed to people.  Or perhaps they thought they saw a resemblance to Elijah.  Or perhaps he looked less imposing standing up to his waste in the water.

John wasn’t just ranting, out there on the outskirts of town.  What he called people to was down right sacramental. The baptism he provided offered hope in ways people were deeply aching for.  A new start.  Forgiveness.  A personal connection with God.  John offered these things people were desperate for, using a method and a locale that took them far outside their normal lives.

Heck, he was such a good advance man that the person he was barking about, Jesus, actually showed up for a dunk in the river, too.  If that’s not validation, I don’t know what is.

So here’s the thing.  You and I tend to sanitize Christmas.  Just take a look at the nativity scene set up in your house, and you probably won’t see a Grizzly Adams-looking figure stuck there between the shepherds and the kings.

But John is as much a part of the Christmas story as any of those other figures.  He represents the break from the status quo.  He reminds us that the beginning of a new story can and should be a little scary.

But if John gives you pause, that’s just to get your attention.  There’s no need to retreat in fear.

He’s the advance man, after all, and he’s all about hope. 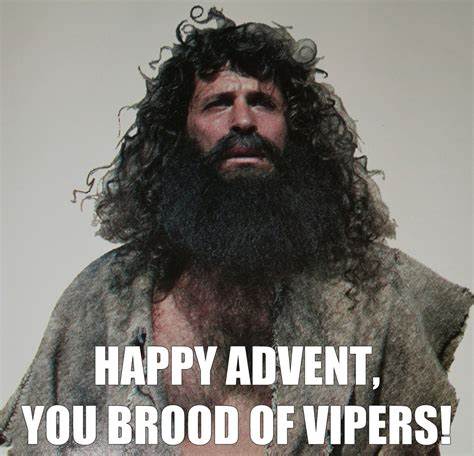 One thought on “Would You Hire This Advance Man?”