I have sympathy for Nazis. But by no means does that make me a Nazi sympathizer!  In fact, there are few groups in the world that disgust me as much as they do.

With their marching, and swastika waving, and saluting, not to mention their racist, fascist words and actions, I might be persuaded to punch one in the face, and I’m a man of peace!

Remember that scene at the end of Raiders of the Lost Ark, when the Nazis open up the Ark of the Covenant, and the Spirit comes out and basically smites all the Nazis?  Well, I don’t really think that’s something the Holy Spirit would do, but I can’t help but cheer.

I try not to hate, and it makes especially little sense when that hate is directed towards a “hate group”, but groups like the Nazis, and the KKK, and ISIS make me want to scream in rage.

Oh, you too?  Alright, let’s leave a little space here for some primal screaming.  Ready?  Go!

Okay.  I feel a little better.  I, for one, angry as these hate groups may make me, have to be sure not to just stuff down my emotions and ignore them. I think it’s okay to let it out, but as a controlled burn, not a wildfire.  I think we have a right to be angry, but not give in to hate.

So how is it that I can feel sorry for these jerks?  These walking, talking time bombs of intolerance?  Isn’t that like having sympathy for the devil?  (Rolling Stones reference, by the way).

No, it’s having sympathy for people who don’t see the light.  Who don’t see light at all.  As Jesus mentions in the passage above, people whose eyes are unhealthy, and all they can see is darkness.

What damaged their eyes?  What caused these folks to see such hate?

Maybe it was their parents.  Racism is often a passed-down trait.  They were raised to hate and fear types of people, and so they do.

Maybe it was their situation.  Maybe they need somebody to blame for their social status, or their poverty, or their unemployment.  Or course, that makes it sound like Nazis and other racists come from the lower class alone.  Racism, so to say, does not discriminate.  It can be found in all levels of society.

Maybe they never heard of God.  Or never learned to see the good in others.  Maybe they willfully stared at the wrong things, dark things.  Or saw hatred as a way to get ahead.

I don’t know why Nazi’s choose Nazi-ing (“Not Seeing”) the light of God in all God’s people, but I can attest, that light is there.  Even a Nazi is not immune from the power and love of God’s light.  There is hope.

So, although I find myself tensing up in frustration at the sight of a swastika, I just keep praying for a little of God’s light to break through.

Maybe, instead of a full-on smite, the Spirit can give those Nazis

a painful, yet eye-opening sunburn. 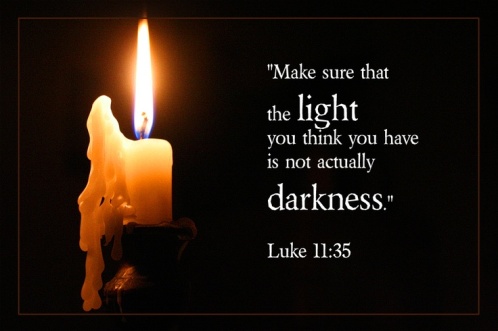